A plot or building surrounded by parallel roads is considered best for house inmates in terms of happiness, riches and pleasures. Vastu retorts parallel roads going through the roads around a house are auspicious in every sense and holds good for inmates except if roads run through South or East. So check out a plot thoroughly that they must have parallel roads or more than 2 roads running through your site for better results.

More than two roads running along side a house is lucky for inmates in fetching all riches and pleasures of life while only exception of South & East directions roads on other directions are feasible and lucky. But there are handfuls of such properties having four or parallel side roads and it has been observed doing well with their business than others. 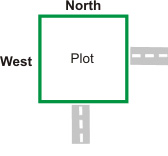 However well maintained back lanes also seen to be lucky and auspicious for people while back to back lanes create problems.

Do not worry if you stay in multi-storey building because passages, runways, corridors, windows all are akin to roads in specific direction. Roads surrounding buildings prosper better than a house having a single or no road surrounding house.