Crystal is a three-dimensional structure of transparent stone which is believed to exhibit positive energy thus transforms environment by deriving energy from cosmos. Vastu crystal has immense effect on individual both mentally and physically as well as on surroundings in creating them stable and relax

Crystal is most common remedy or measure of Vastu correction that have been used by many people to keep the negative vibes away from home & surrounding. The crystal can be found with made of different ethnic stone which are sporadically used to cure and yield its mystic support. The energy a crystal emits is such that nothing could be unaffected by its aura that happens to stimulate nearby atmosphere and restoring the positivity. 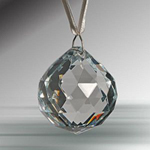 Crystals are well acknowledged for their spiritual power, healing properties and have been energizing our homes to make a prosper living place contained with all around bliss.
Make your surroundings a better place to live in.
Click here to avail our Vastu Consultancy