Vastu for Flats / Vastu for Apartments

In today's world, purchasing a piece of land is highly difficult as well as expensive, hence apartments have become the best alternative. Apartments are also preferred over an independent house because of various types of amenities & facilities available for the residents. Children get the well-maintained parks to play in, swimming pool for all, fitness center for the adults and overall security for all. Due to modern architectural designs, it is virtually impossible to find an apartment / flat without any cuts or extensions and according to the principles of Vastu Shastra the cuts & extensions play a vital role. We have tried to put across few points which one should take care of if they are either the selections stage of the apartment or if they are already living in one. This article will guide you how to check vastu for flat or an apartment.

Do not get carried away if you are getting North East entrance flat, it might still not be good. This is the biggest myth people have that if one get a NorthEastern entrance flat then the Vastu of the flat is good, it is not always true, and do not get carried away. According to Vaastu, there are 32 zones of entrances and every part has its own significance. However the best entrances considered are East, North & Northeast. The internal construction of any property plays a major role in deciding about the compliance of Vastu Shastra. One should still check the location of the kitchen, the toilets, the masterbedroom, the balconies and many more. Since most of the flats are not at a 90 degree angle, hence the flat should be analysed properly by an expert before you purchase.

Many people confuse facing of apartment. One should check the placement of the main door, or the entrance of the flat as described above.

It has been observed that many apartments that have East or North entrances, their kitchen is right next to it, hence it occupies the North East (kitchen in the North East of an apartment), one should reject such property. The first preference of kitchen is always SouthEast, then comes the NorthWest. After SouthEast, you can have kitchen in NorthWest, West, East of SouthEast or South, though they are not the best but can still be considered. Kitchen in North, Northeast and Southwest are detrimental. Along with the position of the kitchen, one also has to observe the position of other utility rooms. 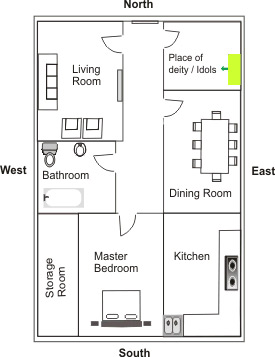 When it comes to the internal construction, the placement of rooms is one of the criteria which can change the Vaastu compliance of the property. We all know by now that the masterbedroom should always be in the SouthWest of the flat. Is there a room in the SouthWest, whether it is a masterbedroom or not? Can it be used by the masters of the family? Think? Kids should occupy the East or North room.

According to the current trend appartments generally have more than one toilet, hence there will certainly be one or two toilets which will definetely not come in the correct direction. Hence while selection one has to judge where they are coming! Ideally toilet should be in the NorthWest. Toilets in North, NorthEast, SouthEast and SouthWest direction should be avoided. It is hard to to judge by a normal person, hence one should always consult an expert.

The living area or the drawing room is best placed in North, Northwest, West or even South. However, all the directions except Southwest can be considered for drawing room.

Shape of the apartment

The shape of any property plays a very important role. Always prefer square or rectangular apartments. As mentioned above, one cannot ignore the cuts or extensions if one wishes to stay in an apartment. Though cuts or exentions are very bad and creates similar kind of problems in the lives of the inhabitant. What should one do? If there is a cut in NorthEast or SouthWest, reject the property. If there is extension in any direction except NorthEast, one should reject the property.

IMPORTANT: since the directions are very important in Vastu Shastra, the floor plan has to be carefully analysed to find the exact location of the cut or extension, which cannot & should not be done by a normal person because if it is not analysed carefully one might draw a wrong conclusion. Self remedies can be very fatal and one does not spend such a huge amount on property on daily basis, so always consult an expert.

In apartment there are generally more than one balcony. The balconies are best placed in North, Northeast & East as all the positivity and morning sunlight comes from these directions. Ensure there is atleast one in either of these directions.

Just like cuts, extensions are also very common these days in apartments. Extensions in any other directions except the North East are considered very bad according to Vastu principles.

One of the biggest misconception the audience has is that Vastu Shastra cannot be applied to an existing apartment. People ask the questions: Is Vastu applicable for flats? Some people also believe that Vastu principles can only be applied to those properties that are on ground i.e. not in the air (upper level), which is wrong!

Every apartment/flat is a different study. Though general rules have already been defined above, hence if you are already living in an apartment then consider consulting an expert for the remedies for the existing Vastu Dosh because by placing an object in the location of the dosh does not remove the dosh, this is a myth. To balance the negative effect of the dosh, many times the direciton opposite also has to be studied and used for the remedy, hence general remedy is less effective. Audience believe that by reading few topics on intenet and by applying those remedies the Vastu Dosh can be nullified. Again this is the biggest mistake people do.
source:https://www.vaastu-shastra.com - Copyright Dr. Smita Narang